Many readers of academic publications want to understand the implications the studies have for their everyday practice. As teachers, when we read about an instructional practice, we want to know, ultimately, “Does it make a difference?” In an academic publication, this nugget of information is often contained within the reported effect size of an intervention; however, effect sizes are not easily interpretable and often do not convey the practical significance or applicability of an effect to practice.

This paper, published by the Institute for Education Sciences, acknowledges that “Does it make a difference?” is a common question of readers and suggests ways in which researchers can be mindful of and sensitive to this concern by reporting effects of intervention studies in more interpretable ways. The paper focuses on randomized controlled trials, in which participants are randomly assigned to either a treatment or comparison group. At the end of such a study, the means of these two groups are compared to determine the effectiveness of the intervention. Although randomized controlled trials represent a small group of studies in the education literature, the concepts described in the paper are easily transferable to quasi-experiments and other types of study designs and are useful for all readers of academic publications in which intervention effects are described. The authors do note, however, that the paper is not intended to cover observational studies.

The Many Significances of an Effect

Readers of academic publications are intimately acquainted with the term statistical significance and probably know that it is reported (as a p-value) in the results of all intervention studies. Although statistical significance tells us the extent to which the effect is likely due to chance when the null hypothesis is true, it is highly related to sample size (the larger the sample, the more likely any effect is to be statistically significant) and does not tell us about the magnitude of the effect, nor about its importance.

Because of these drawbacks, in addition to the statistical significance of an effect, researchers often also report an effect size. A standardized effect size is basically the difference between the treatment group’s mean and the comparison group’s mean, expressed in standard deviation units. In other words, a standardized effect size is the “size” of the effect, scaled in terms of the variation (or “spread”) of outcome scores. There are more descriptions of effect sizes in our November 2012, January 2013, and February 2013 columns.

To most researchers, effect size seems to be a reasonable way to describe an effect in a meaningful, comparable, interpretable way. However, a reader must make many assumptions when interpreting or comparing an effect size, unless much is known about the way in which the outcome was measured and the effect size was computed. In addition, even if the article contains sufficient detail about measurement of outcomes or the reader is comfortable enough with the assumptions to be satisfied that the reported effect size is accurate and appropriate, the reader still does not have any information about the practical magnitude of the effect. Common conventions for classifying effects as “small,” “moderate,” or “large” based solely on the value of the effect size (e.g., Cohen’s criteria, which, as the authors point out, Cohen never intended to be used as absolute criteria but are nonetheless often cited as such) compare effects across fields, content areas, and populations, thus discounting the fact that the magnitude of a reasonable, important, or expected effect may differ, depending on the circumstance.

Recommendation 1: If a standardized effect size is reported, consider which means were used to calculate the effect and which variance was used to scale it.

In many studies, even when participants were randomly assigned to either the treatment or comparison group, these groups were not equal to each other before the intervention began. If the groups were not equal at the beginning of the study, it doesn’t make much sense to compare the group means at the end of the study without adjusting for the inequality at the start. Researchers use covariates to adjust these group means, making them mathematically equal at the beginning of the study, so that any differences in means found at the end of the study are primarily attributable to the intervention. Similarly, it is most appropriate to use these covariate-adjusted means for each group when calculating the mean difference that is reported in the effect size.

Recommendation 2: Consider other metrics when interpreting the magnitude of an effect.

It is possible that even a standardized effect size does not answer a reader’s “Does it make a difference?” question. In some cases, different and more familiar descriptions of effects are more useful to readers. The paper describes several other effects that may be presented in an academic publication, along with the rationale and cautions for using them. These metrics are listed below with a brief explanation and guidance for their interpretation. Far more detail about each is included in the paper. 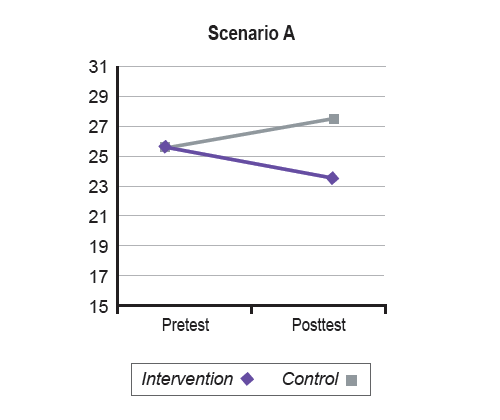 Recommendation 3: Consider the implications of an effect as well as its magnitude.

Even when an effect is large in magnitude, numbers alone cannot describe its practical implications. To understand an effect’s implications (central to our “Does it make a difference?” question), its magnitude must be considered in the context of application. For any intervention to “matter,” the pros of implementing it in live settings must outweigh the cons. There are a number of ways to determine the pros and cons of implementing an intervention. The paper provides four frameworks for making such a determination; those frameworks are described below. It is important, though, to be careful that the populations and outcomes of interventions being compared are in fact comparable. For example, effects of high school and elementary mathematics interventions are generally not appropriate for comparison to each other, nor are effects of preschool reading and middle school reading interventions.

To date, the reporting of intervention effects has been a complicated venture. Readers of academic publications are often presented with potentially inaccurate, possibly misleading numeric values, with no context for interpreting their magnitudes or implications. In recognizing this issue, the Institute of Education Sciences attempts to add to the ways in which researchers calculate and report effects, with the hope that these additions will make it easier for readers to interpret effects in meaningful ways. This paper outlines several methods in detail that researchers can use to translate effects from statistical forms to more practically meaningful forms. In doing so, it also offers guidance to readers for understanding and interpreting effects. Broadly, this guidance compels readers to consider what data would be best to use to calculate a standardized effect size, to entertain the use of nonstandard metrics (when relevant and appropriate) to describe the magnitude an effect, and to include both the magnitude and the implications of an effect when determining its practical significance or relevance to practice.